The Skeena River and its tributaries offer fantastic conditions for fly and spin-fishing. Spring Steelhead open the season as early as March, followed by the 5 pacific salmon species over the summer and fall. Until the arrival of the first snow, powerful fish are traveling into the headwaters of the numerous tributaries in the region. In the area surrounding Fishermans Lodge and the Skeena River, there are at least 20 other rivers and lakes accessible for some great fishing experiences. Surrounded by magnificent nature and wilderness you can experience some exceptional world class fishing ,with the chance of the fish of your life time. 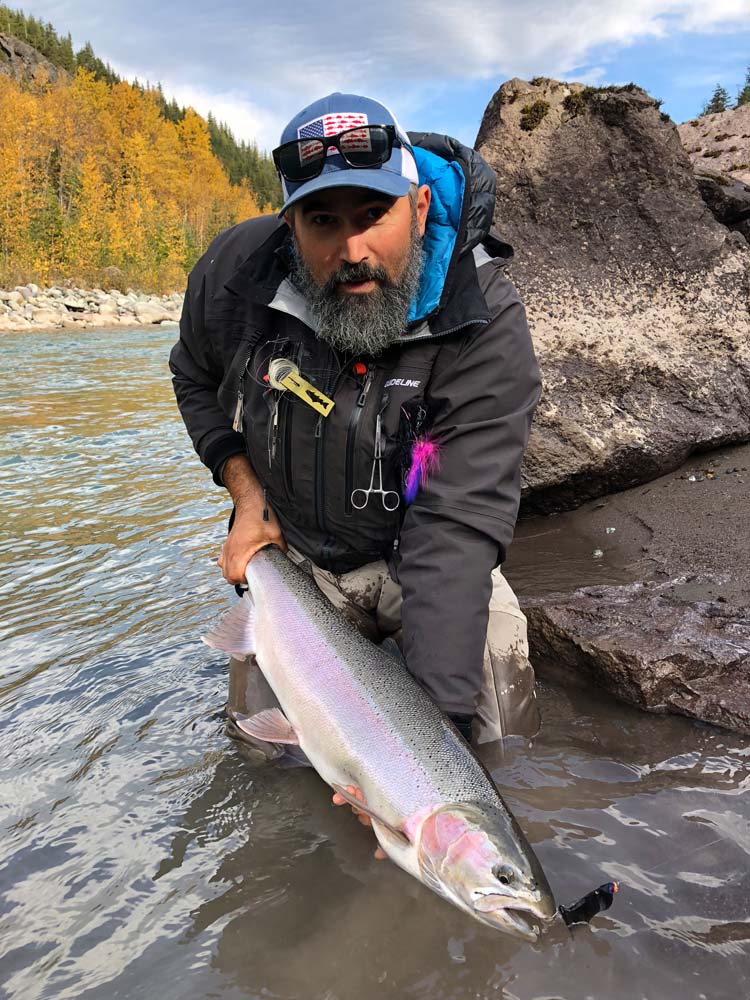 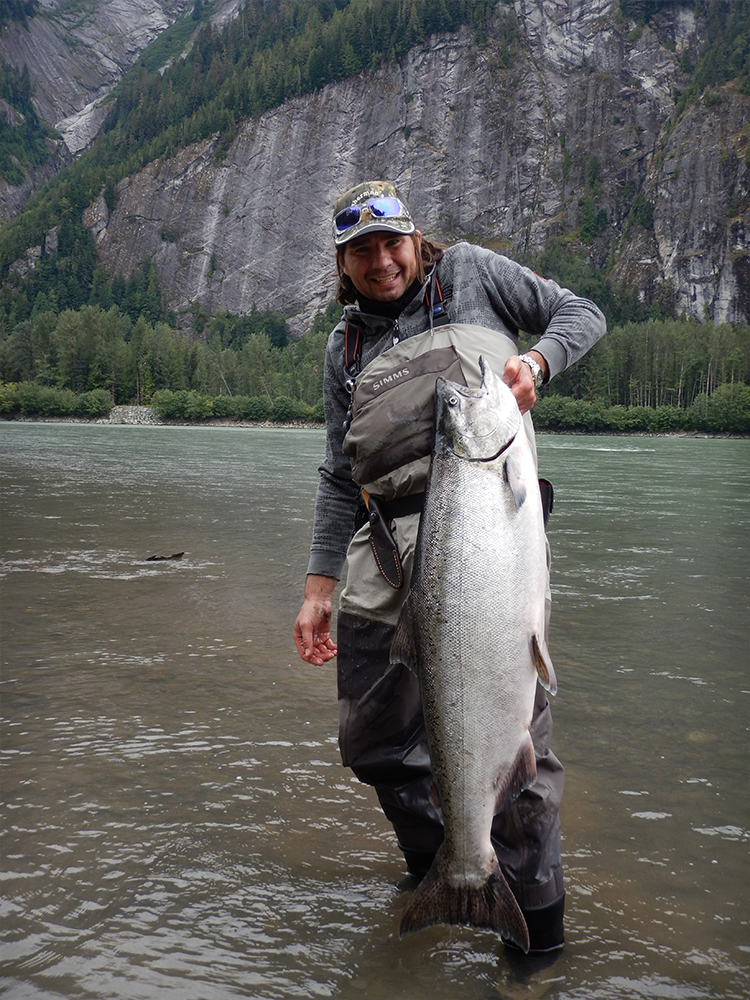 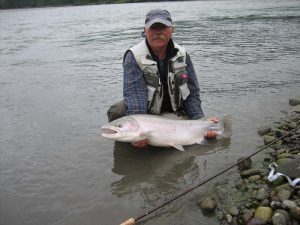 A legendary fighter, the steelhead has a long history in BC’s angling communities like Terrace. Although there have been recent fish population declines in the Georgia Basin area, protective measures have been put in place to restore dwindling stocks. Steelhead live up to nine years and spend between one and three years in freshwater before smolting and entering the ocean.

After spawning, many adult steelhead return to the sea and some (up to 20 per cent, mostly females) return to freshwater after recuperation to spawn a second time. While in the sea, the body is mainly silver with a blue back. At spawning time, a band of red colour develops along each side of the body. Some individuals can spawn many times, and those that repeat spawn are referred to as “kelts”. We have a spring run in April and May, but the main migration up the Skeena River system starts by midsummer and goes all the way to end of October. Catch and release restrictions have allowed the number of fish in our world class rivers to increase in the last few years and make for outstanding fishing. 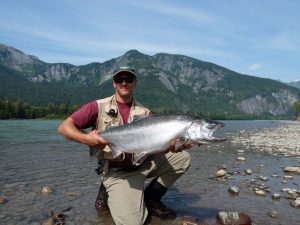 The chinook is the largest of the Pacific salmon species with the world record catch standing at 57.27 kilograms (126 pounds). We are proud of our lodge record of 76 lbs! They are also known as “spring” salmon because they return to some rivers earlier than other Pacific salmon species. The main run in the Skeena River system starts mid June and goes until the beginning of August.

A favourite in recreational fishing, the chinook salmon is known by many names: king, black mouth, quinnat, and chub. The special name “Tyee” is reserved for those over 14 kilograms (30 pounds). Chinook spend at least a year in freshwater. These fish are known to migrate vast distances and are found sparsely distributed throughout the Pacific Ocean. The age of chinook adults returning to spawn varies from two to seven years. Many river systems have more than one stock of chinook with some rivers having spring, fall and winter runs.

After spending up to 18 months at sea, 3-5 year old adults migrate up our river system later in the season. Bright silver and blue backs indicate fish recently from the ocean. Their willingness to take lures and their tendency to jump and dodge makes them a favourite among sport fishers. With weights up to 20 lbs, they are great fighters on the fly or lighter spinning gear.

The best catches in our rivers happen from late July to mid October with a peak in August/September. Fly fishers take coho from stream mouths using buck tail flies and anglers use spinners or lures with success. Often coho school at the mouths of rivers and move upriver when autumn rains increase river flow. Spawning takes place between October and December and their colour turns bright red and green. Coho, custom-processed and packaged in our smokehouse, makes an unforgettable cold-smoked salmon delicacy. 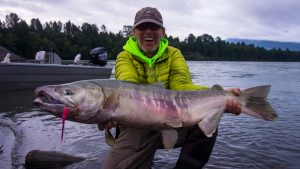 Chum or dog salmon are the second biggest of the Pacific salmon. Up to 35 lbs they are great fighters and migrate in the Skeena and Kitimat rivers by mid July.

Considered an attractive fish, chum in tidal waters are metallic blue and silver, with occasional black speckling on the back. Spawning chum are readily recognized by the dark horizontal stripe running down their sides, the canine-like teeth of the large males and a checkerboard or calico colouration. Chum salmon have always been of particular importance to First Nations people as food. They are now considered a sport fish and are sought after by North American anglers. 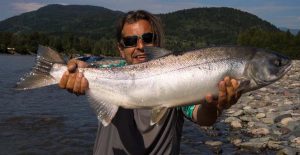 The best known and small Pacific salmon, sockeye are the most sought after for their superior flesh, colour and quality. Their rich oil content and red colour make them a favourite for First Nation, commercial and sport fishing. Fresh sockeye are silver in colour, with small black speckles along the body. They migrate to their spawning grounds within 3-4 years. As sockeye approach their home streams, they turn varying shades of red – resulting in a brilliant scarlet fish with a green head by the time they arrive at their birthplace.

It is this deep colouring, along with the rich cultural, economic and ecological history that continue to make sockeye a symbol of the Pacific Region. With weights up to 12 lbs, fresh sockeye are great fighters on the fly or light spinning gear. Enjoy your sockeye catch cold-smoked as we will custom-process it for you in our lodge’s smokehouse. 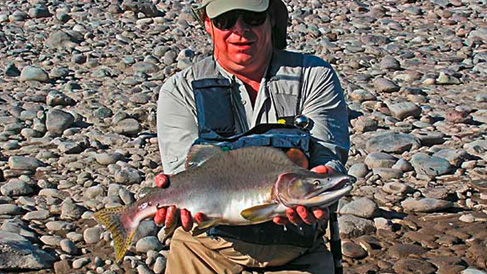 Pink salmon are the most abundant of the five species of salmon in our rivers with a short, two-year lifespan. Fishers know these salmon as “humpbacks” or “humpies” due to the humped back developed in males as they return to spawn. Sport fishers generally catch pinks with the use of artificial lures. With weights up to 12 lbs, they are not great fighters, but the pink coloured meat from a fresh and silver fish is tasty when freshly prepared on a BBQ. The commercial industry uses pinks mainly for canning.
Trout, Dolly Varden 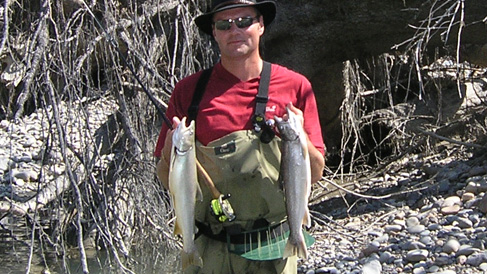 We have a wide variety of different trout, Dolly Varden and Arctic grayling in our rivers. Dolly Varden, rainbow, coastal cutthroat, char, bull and brook trout are the most common. They are all attractive sport fish due to their tendency to leap when hooked. Fly and spin fishers come into our region to catch these beautiful fish. These species are important sport fish as they are hard fighters and can be large. The flesh is orange-red, rich and retains excellent flavour when smoked, fried or baked.

From June until early August up to 60 pounds and more, pure power and adrenaline.
Request